Communities of color are dying at higher rates from the novel coronavirus than white Americans. Here’s how structural inequities play a role.

AUSTIN – For decades, Lois Villaseñor had helped Latino families coping with the death of loved ones.

Recently, the East Austin funeral home she and her late husband founded in the late 1950s has been busier, as the coronavirus pandemic swept over the community it serves. The business has adopted funeral rites — limited, masked services with burials often viewed through car windows.

In late July, at age 87, Villaseñor herself died of COVID-related complications, one of scores of coronavirus deaths last month in Travis County at the height — thus far — of the pandemic in Texas. Her service, like so many others nowadays in this time of remote grieving, was livestreamed.

Villaseñor had long been retired from Mission Funeral Home — she had been living at home, suffering from dementia at the time of her death, according to her son, Charles Villaseñor II, who now runs the business — but her death signifies not only the long reach of the virus, especially among Latinos, but another rip in the fabric of fast-changing East Austin. 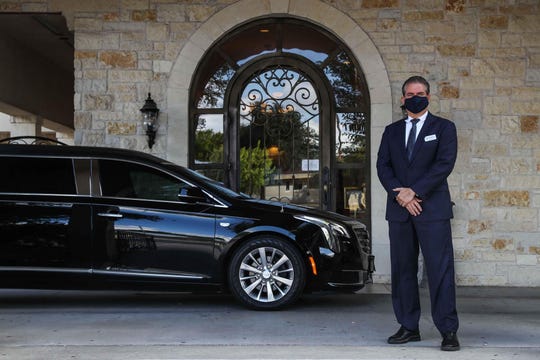 Charles Villaseñor stands outside the South First Street location of Mission Funeral Home. The business was started by his parents in East Austin and served as the first funeral parlor in Austin for Hispanic families. (Photo: Lola Gomez, Austin American-Statesman)

“When they came to Austin it was very segregated,” Charles Villaseñor II said of his parents.

There was no funeral home catering to Latinos, he said, and his parents “filled the void,” building a funeral home on East Cesar Chavez Street — then known as East First Street.

At the funeral service last week at Our Lady of Guadalupe Catholic Church on East Ninth Street, state Sen. Carol Alvarado, D-Houston, whose family were friends with the Villaseñors, said the funeral home was key to the tissue of the area.

“Long before scooters arrived in Austin, or hipsters or manbuns, Charles and Lois were building a community here on the East Side,” Alvarado said. “The foundation they laid, the real estate they bought, the businesses they helped build, is why this particular part of Austin can grow and prosper.”

“They started here because of their drive to help la nuestra gente,” she continued.

Villaseñor’s death came at the end of the coronavirus’ deadliest month, thus far, in Texas.

More than 4,500 people died in Texas in July of COVID-19 — more than half of the total deaths in the state since the first Texan was confirmed to have succumbed to the virus in March — and the disease has disproportionately affected Latinos.

Statewide, Hispanics make up 39.7% of COVID-19 cases — in keeping with their portion of the state population. But they make up 51.4% of fatalities from COVID-19, according to the latest statistics from the Texas Department State of Health Services.

In Travis County, which is 33.6% percent Hispanic, 51% of the cases are Hispanic and 48% of the deaths are Hispanic, according to Austin Public Health figures.

The infection rate among Latinos likely underestimates how many are infected for a variety of reasons.

Notably, testing sites are less likely to be located in poorer communities of color. Testing costs, the stigma of a positive test, and — among people living in the country illegally — the fear of deportation are also contributing factors, said Jamboor Vishwanatha, director of the Texas Center for Health Disparities at the University of North Texas Health Science Center in Fort Worth.

Asked in late July on Telemundo McAllen about people who might fear getting tested because of their citizenship status, Gov. Greg Abbott encouraged people to get tested. “The primary concern is the health care of everybody,” he said. “There are no questions about … status.”

The disproportionate death rate among Latinos is due to “sociological factors such as lack of transportation, the lack of availability of testing sites,” Vishwanatha said. “Work conditions, too, in which they’re considered essential workers, all these have made the situation bad.

“The death rate is really exposing societal issues — access to health care, lack of health insurance, worry about losing income, and the fear that if you’re diagnosed you will you lose your job,” he said. “These are leading people to perhaps not seek medical care. It’s also exposing other health disparities, there is more cardio-vascular disease, more hypertension, cancer.”

A home in East Austin

Lois Villaseñor was well looked after by her family and at-home medical attendants, her son said.

She was born in Cuero, Texas, to a migrant farming family, picking cotton in her early years.

When she was a teenager, national news regarding the treatment of Latinos by funeral parlors unfolded about an hour away from Cuero in the small town of Three Rivers.

When the body of Private Felix Longoria, who had been killed in the Philippines during World War II was returned home to Three Rivers in the late 1940s, the local funeral parlor refused to hold a wake, claiming, “The whites would not like it.” Longoria could be buried only in the separate Mexican section of the cemetery. Eventually, after a campaign from his widow, then-freshman Sen. Lyndon B. Johnson got involved, arranging a burial for Longoria with full military honors in Arlington National Cemetery.

Lois and her husband, Charles L. Villaseñor, who had trained in the funeral business in Houston, struck out to Austin in the late 1950s.

“We came to Austin and looked around, and we chose East Austin because we wanted to be a part of the Hispanic community.” she told the Austin Chronicle in 2004.

She continued: “We saw there was a void in funeral services available to the families here. This was way back when the bodies would lie at home.” Mission Funeral Home was the first to build a “parlor” so Latino families could gather at a funeral chapel to pay respects to loved ones.

In 1961, she was one of only a handful of women to graduate from a mortuary college in Houston.

She was the first Latino woman to serve on the Texas Funeral Service Commission as a 1989 appointee of Gov. Bill Clements. She also served on the boards of Catholic charities and Latino political groups, serving at one point as the president of the local LULAC council.

The matriarch of the family, she was known for her impeccable dress and her pioneering sense of adventure, at one point obtaining a pilot’s license. She liked taking day trips to San Antonio to visit the Market Square and to dine at Mi Tierra, all the while keeping the books at the business.

Her husband of 37 years, Charles Villaseñor, died in 1991, and she continued at the helm until her son succeeded her in 1992. The business now has four locations.

In addition to her son, she is survived by her daughters, Rebecca Villaseñor Burrisk and Melissa Villaseñor-Dye; two grandsons, Charles Douglas Dye and Spencer Keith Dye; brother, Adam Peña; and many other family members and friends.

“My mother understood that you never know a family’s grief until it happens to you. That understanding now comes full circle for me,” said Charles Villaseñor II.

Today that includes the increasing challenges of COVID19-related deaths.

“Funerals for families whose loved ones suffered from COVID-19 have been all consuming, but my mother would have wanted Mission Funeral Homes to continue providing the same level of compassionate care for others that we are now providing to our own beloved mother,” he said.