SportsPulse: Dan Wolken doesn’t mince words as to the real reason universities and conferences are going to bend over backwards to make a college football season happen this fall. And it has nothing to do with wins and losses.

The cautious optimism that accompanied the return of athletes to campuses across the Football Bowl Subdivision earlier this month has been muted by a recent series of setbacks with the potential to alter when the upcoming season begins and ends, in turn threatening the state of the entire schedule.

In particular, two developments — the rash of COVID-19 breakouts among teams and remarks from national health officials on a possible second wave of the pandemic — have birthed an increased level of uncertainty at a time when teams were beginning to embrace the sense of normalcy provided by the massive influx of players and coaches returning to college campuses.

“I think everybody is seeing the numbers and paying attention to what’s going on, obviously. I think everybody’s hope was that, you know, things would be declining instead of increasing,” said SMU coach Sonny Dykes.

“But at the same time, I think everybody feels good about their plan. I know we certainly feel good about ours.” 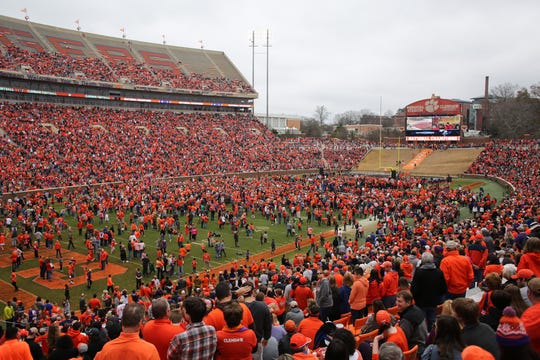 It’s still not clear if we’ll have scenes in the fall such as this one at Clemson. (Photo: Dawson Powers, USA TODAY Sports)

Players began filing back into football facilities beginning on June 1 with the NCAA’s decision to allow voluntary team activities. Last week, the Division I Council approved a plan for practices to begin six weeks before the scheduled start of the season “that balances the proper precautions due to the COVID-19 pandemic with the need for an acclimatization period to safely return to play,” said council chair Grace Calhoun, athletics director at the University of Pennsylvania.

But this return has been joined by a flurry of positive tests for COVID-19, several large enough to raise eyebrows: Clemson said last week that 23 players had tested positive for the coronavirus, while at least 30 players at LSU have been quarantined after testing positive for COVID-19 or coming into contact with someone who had.

“Obviously, something happened,” LSU coach Ed Orgeron said on Tuesday. “This is the new lay of the land. It’s something that we have to work through. I think our guys are doing a very good job of adjusting, and we should be fine.”

Kansas State said on Saturday that it was suspending workouts for two weeks after 14 athletes tested positive. Among teams on the Group of Five level, Houston and Boise State have suspended voluntary activities after several players tested positive, with Boise State shutting down campus entirely until Sunday after seeing eight cases of the coronavirus during a two-day span.

Overall, USA TODAY Sports identified 37 universities with FBS programs, roughly a quarter of the FBS, that have reported positive cases of COVID-19 among athletes and/or staff at a time when the overall number of cases is soaring in several states. (Not every university is revealing test results, meaning the total may be significantly higher, and not all the athletes are football players.) Nine states reported record highs in their seven-day average of new reported cases on Monday. Texas and California, which combined account for 19 FBS programs, saw new single-day high numbers of documented cases within the past week.

“As we’ve gone through this, we’ve tried to be very measured at how we get back together,” he said. “We will move along as we get directed to move along.”

Teams and conferences on the Championship Subdivision level have already altered plans for September.

The recent rise in cases around Memphis led to the cancellation of the Southern Heritage Classic, which was to feature Jackson State and Tennessee State on Sept. 12 in the annual matchup between teams from historically Black colleges and universities.

The Patriot League, which has five games scheduled against FBS competition in September, announced on Monday that non-conference games would not be held before Sept. 4 and that no Patriot League team would fly to competitions — meaning that one of those five matchups, Fordham at Hawaii on Sept. 12, could become the first cancellation to the FBS schedule. The Patriot League has a meeting on Wednesday that will further discuss how the announcement will affect football.

Meanwhile, the rise in coronavirus cases comes as national health officials are issuing stark warnings about the possibility that the pandemic lingers into the fall or that the country experiences a second wave of outbreaks.

Anthony Fauci,  director of the National Institute of Allergy and Infectious Diseases, said in an interview on CNN that unless football players are “essentially in a bubble — insulated from the community and they are tested nearly every day — it would be very hard to see how football is able to be played this fall.”

“If there is a second wave, which is certainly a possibility and which would be complicated by the predictable flu season, football may not happen this year,” he told the network.

This potential for a second wave has many schools opting to end in-person classes around Thanksgiving, in an effort to reduce the number of students leaving and returning to campus and limit the exposure to COVID-19. Michigan and Auburn followed suit on Monday; in-person instruction at Michigan will end on Nov. 20 and resume remotely on Nov. 30, with final exams beginning in December.

The biggest game of Michigan’s season — the regular-season finale at rival Ohio State — is scheduled for Nov. 28, after students at both schools have already been sent away for the semester.

“Michigan Athletics is working with our public health experts and consulting with the Big Ten and NCAA on determining whether our student-athletes can safely return to competition this fall. An announcement will be forthcoming in the weeks ahead,” university president Mark Schlissel said in a statement Monday.

These movements on the academic calendar may foreshadow similar changes to the regular-season schedule. During a call held earlier this month with other sports executives and congressional Republicans, NCAA President Mark Emmert said the regular season could end around Thanksgiving, casting conference championships and the postseason in doubt. Under normal circumstances, conference championship games would be held on the first weekend of December with postseason play beginning later in the month.

“We are planning to play the semifinals January 1 and the championship game January 11 as scheduled,” College Football Playoff Executive Director Bill Hancock said.

At the same time, that athletes were able to return to campuses this month is reason for optimism. Several FBS coaches told USA TODAY Sports in late March, when the coronavirus pandemic was beginning to spread, that early July was the latest teams could return to normalcy and still meet the start of the upcoming season. While additional coronavirus outbreaks could derail preseason workouts and practices, teams have been given enough time to prepare for the season to begin as scheduled.

And many schools are reporting limited numbers of cases or, in a handful of places, no positive tests at all. Washington has seen zero positives. Indiana has tested 187 athletes, coaches and staff members without a positive result. Notre Dame tested 91 football players and 50 staff members with one player testing positive, the program announced Monday. Of the 117 athletes recently tested by Wisconsin, two came back with a positive result. These small outbreaks have so far outnumbered the large surge in cases seen at Clemson, LSU and elsewhere.

“I think that’s kind of been the big takeaway from this,” Dykes said. “It’s hard to know exactly what’s going on. I think that’s been a little bit frustrating for everybody.

“I do think, like anything else, everybody is paying attention to everybody else’s season. Everybody’s primary concern is the health of our student-athletes. I think everybody is concerned, but at the same time I think we’re being as optimistic as we can be.”