Colleges aren’t the only schools that have had to close their doors soon after reopening.

And in some cases, school officials are laying the blame for their changing plans on families in their communities, where graduation and end-of-summer parties prompted spikes in positive COVID-19 cases.

That’s what happened in at the Carle Place School District in Long Island, New York, where Superintendent Christine A. Finn announced school would start with remote learning last Wednesday rather than in person.

“We have no choice but to put the safety of our staff and students first,” she said in a letter that connected many of the new positive COVID-19 cases in the community to attendance at parties where some who tested positive had close contact with students.

“As we are learning the hard way, the actions of a few can impact the many,” she added. 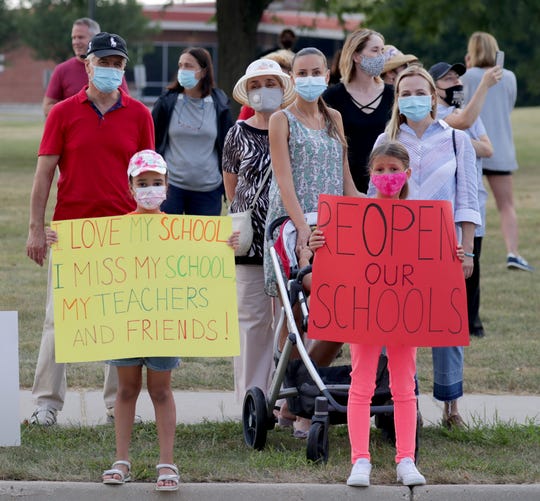 Carle Place isn’t alone. Suburban school districts in Milwaukee and Georgia also have experienced an uptick in COVID-19 cases among students, causing some to scrap or delay plans to open with some students in classrooms.

Parties are only one reason some the switch, with everything from staff shortages to broader outbreaks in the community forcing some districts to flip to an all-remote start.

More than 60% of public-school districts were scheduled to start the year online-only, according to Burbio, a company that aggregates more than 80,000 school calendars nationwide. That’s up from early August, when 52% of those districts were planning for a remote start, the company said.

A USA TODAY analysis of the 15 largest suburban districts also found nine of these school districts planned to reopen remotely, with some flipping their plans as late as July or early August. Some of these districts plan to gradually reopen buildings throughout September and October.

The changes have drawn the ire of parents in bedroom communities, many of them white-collar and not shy about voicing their criticism about their districts’ inability to get kids back into school buildings.

District leaders have been scrambling to find staff as hundreds of teachers have requested to work from home, resigned or taken a leave of absence. In some cases, protective gear has been slow to arrive, and it’s taken longer than expected to prepare buildings.

New Jersey has seen a number of suburban districts switch to virtual starts at the last minute.

About 100 Bernards Township School District parents in upscale Basking Ridge, New Jersey, a suburb of New York City, protested the delay of in-person instruction about a week before the district started all students with virtual learning on Sept. 3.

Bernards won’t open classrooms and shift to a hybrid schooling model until at least Oct. 1 because it needs time to meet state guidelines for holding in-person classes. That includes figuring out staffing and facility safety and obtaining protective gear for teachers, according to the district’s reopening plan.

New Jersey’s Freehold Regional High School District had to switch to an online start on Thursday, with a move to hybrid after 250 staff members filed to work from home or requested a leave of absence. The district reversed its plans for an in-person launch about two weeks before school started.

One big problem: Other nearby suburban districts had also flipped to a virtual start, leaving Freehold teachers in a child care lurch if they were going to teach in person, said Rebecca Policastro, Freehold’s spokeswoman.

“Once our state allowed districts to be remote, it created a domino effect throughout the state and unanticipated child-care issues,” she said.

Many parents were upset that the district had to drop its plans for a hybrid start, with kids in class some days and learning at home on the others, district officials said.

The Wyckoff School District in New Jersey told parents it had to delay its plan for in-person classes until protective gear and new desks it ordered arrive in early September. 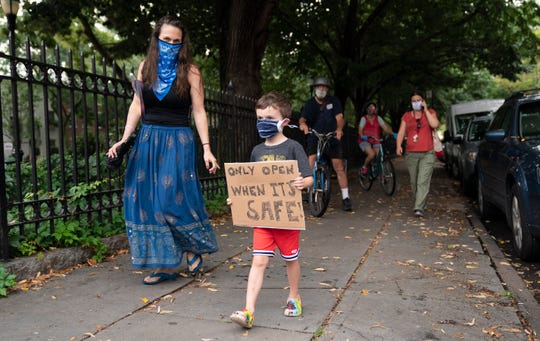 Teachers, parents and children march in the Brooklyn borough of New York on Tuesday to protest the reopening of city public schools amid the ongoing coronavirus pandemic and the threat of a teachers’ strike. (Photo: Mark Lennihan, AP)

It’s been challenging for board members and superintendents to balance students’ and teachers’ safety with the benefits of having them back in school, said Charlie Wilson, president of the national group representing school boards.

“Many factors are outside our control,” he said.

That includes the often conflicting advice from local health departments.

For example, Wilson is a board member of Worthington Schools, located north of Columbus, Ohio. His district and Columbus Schools are under one health department, but other schools in the same county answer to a different health department. One department recommended it’s safe for schools to hold sports, the other says it’s unsafe, Wilson said.

“We thought we could take cues from our local health department, and that would provide stability,” he said. “But the public health department changes its recommendations – often when there’s been no change in the trends for positive (COVID-19) tests.”

Worthington’s school board voted earlier to go all remote for the first nine weeks of school, starting on Aug. 31, because of rising COVID-19 cases. Then the district got enormous pushback from parents who wanted to return to work, Wilson said. The board recently voted to stay remote for a shorter period, until Sept. 28, when it will move to a hybrid teaching format.

“Not everyone was pleased with that compromise,” he added.

Outside of Milwaukee, the upscale Mequon-Thiensville School District changed its school start plans at least three times this summer.

First it planned for in-person learning, then the district asked parents to declare whether they wanted their child to learn in person or remotely, and finally it announced it would start virtually Sept. 1.

‘So much for honor’: Despite COVID cases, college students partied Labor Day weekend away

To blame: the suburb’s spike in infections, traced to a number of large graduation parties held in the community over the summer.

Mequon-Thiensville Superintendent Matthew Joynt encouraged families to take responsibility for helping to slow the spread of the virus so that schools could reopen.

The local health department had recommended that ZIP codes have under an average of 350 cases per 100,000 people over a two-week period before opening classrooms.

Once the rate of infections declined, Mequon-Thiensville switched back to an in-person start for those who wanted it on Sept. 8. About 75% of students planned to come to school in-person every day, while the other 25% learn from home, according to the district.