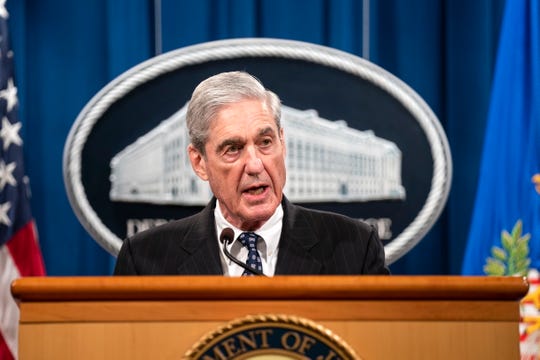 It started almost immediately, with the roll-out of the Russia investigation.

Before the results of special counsel Robert Mueller’s 22-month inquiry into Russia’s interference in the 2016 election were made public a year ago, Attorney General William Barr declared that there was insufficient evidence to charge President Donald Trump with obstruction of justice.

A month later, Barr announced the appointment of a federal prosecutor to review the origins of Mueller’s investigation, adding to a startling assertion that the FBI had spied on the Trump campaign.

Justice’s latest decision to abandon the prosecution of former Trump national security adviser Michael Flynn, analysts said, adds yet a new chapter to the steady dismantling of Mueller’s work that had long threatened Trump’s presidency, while exposing Barr, yet again, to fresh recriminations of fueling a continuing politicization of Justice as a powerful annex of the White House.

David Weinstein, a longtime former federal prosecutor in Miami, said Justice’s repeated interventions in the Mueller cases is “setting a pattern that I have never seen before.”

“Brick by brick, Barr is taking apart the house that Mueller built,” Weinstein said. “And the only reasonable explanation for it is that the president wanted it to happen.”

On Friday, White House spokeswoman Kayeigh McEnany did not dispute that assertion, openly accusing the FBI of “manufacturing” a criminal case against the former national security adviser.

“If the top leaders of the FBI can target a three-star general with three decades of service, they can target you,” McEnany said in a scalding critique at the White House, before offering congratulations to the former administration official.

A prominent face among Mueller targets

Flynn, the decorated retired Army lieutenant general, was perhaps the most prominent face of the half dozen former Trump aides who were prosecuted during Mueller’s nearly two-year investigation.

Paul Manafort, who served as Trump’s campaign chairman; Rick Gates, the one-time top Manafort deputy; Michael Cohen, Trump’s former personal attorney; George Papadopoulos, a former campaign adviser; and Stone were all swept up in Mueller investigations or in cases that grew out of the special counsel’s far-reaching inquiry.

But it was Flynn who was the first to be prosecuted for conduct during Trump’s presidency when only days into his job as national security adviser he lied about his contacts with then-Russian ambassador Sergey Kislyak.

The DOJ will drop the criminal case against Gen. Michael Flynn for lying to the FBI about contact with a Russian Ambassador. Flynn pleaded guilty.

Flynn quickly pleaded guilty and provided Mueller’s investigators with extensive cooperation that was lauded in subsequent court documents. Even when Flynn reversed course earlier this year and sought to withdraw his plea, prosecutors continued to pursue his sentencing, making Thursday’s decision by Justice all the more stunning.

The government’s filing was preceded by the formal withdrawal of chief prosecutor, Brandon Van Grack, a member of Mueller’s team who also assisted in Manafort’s prosecution. No explanation was given for Van Grack’s departure, but it immediately raised comparisons to the February withdrawal of the four prosecutors in Stone’s case, who left in protest of Justice’s move to soften the sentencing recommendation for the longtime Trump friend.

In Flynn’s case, Justice took issue with the FBI’s initial interview of the newly-minted national security adviser. Only days earlier, the department released four-pages of emails and internal documents showing how agents prepared for the January 2017 interview.

“What is our goal? Truth/Admission or to get him to lie, so we can prosecute him or get him fired?” according to a page of handwritten notes. “We regularly show evidence, with the goal of getting them to admit their wrongdoing.”

The disclosure immediately revived Trump’s long-standing criticism of the department’s treatment of Flynn.

“They tormented him – dirty cops tormented Gen. Flynn,” Trump told reporters a day after the documents were disclosed. The president went on to suggest he would pardon his ex-aide if he was unable to withdraw his guilty plea.

“The government is not persuaded that the January 24, 2017 (Flynn) interview was conducted with a legitimate investigative basis and therefore does not believe Mr. Flynn’s statements were material even if untrue,” the Thursday Justice filing stated. “Moreover, we do not believe that the government can prove either the relevant false statements or their materiality beyond a reasonable doubt.”

Barr, in a later interview, did not dispute the underlying charge that Flynn had lied.

“A crime cannot be established here,” Barr told CBS News on Thursday. “People sometimes plead to things that turn out not to be crimes.”

By that time, Barr’s action was drawing fierce criticism from Democrats who cast it as a blatant effort to bend to the the president, calling for the Justice Department’s inspector general to review the decision. Republicans, meanwhile, saw it as reinforcing their long-standing assertions that Mueller’s team had unfairly targeted the president and his aides.

The attorney general rejected claims that the decision was politically motivated.

“I want to make sure that we restore confidence,” Barr said. “I’m doing the law’s bidding.”

Yet analysts suggested that Barr’s action does not bode well for those who may be swept into the ongoing investigation of the Russia investigation’s origins, headed by the attorney general and Connecticut U.S. Attorney John Durham.

Since Durham’s appointment last year, the inquiry has shifted to a criminal probe, examining in part whether federal investigators abused their surveillance authority.

“If I was part of Mueller’s team, I would be truly worried that Durham is putting together a case because that’s what Trump wants,” said Patrick Cotter, a former federal prosecutor. “Certainly, the Mueller team has to be very troubled, as the Justice Department actions so far appear to be completely devoid from any attempt to act in an ethical and non-partisan way.

On Friday, Trump only appeared more emboldened and offered a hint that the Flynn decision did not mark the end of his personal war against the FBI and the former special counsel.

“Yesterday was a BIG day for Justice in the USA,” Trump tweeted. “Congratulations to General Flynn, and many others. I do believe there is MUCH more to come! Dirty Cops and Crooked Politicians do not go well together!”

A federal judge will make the final decision on whether Flynn’s case will, indeed, be scuttled.

And there was little to suggest Friday that a judge could force the Justice Department to proceed with a case they have now sought to abandon even though U.S. District Judge Emmet Sullivan emerged nearly two years ago as among Flynn’s harshest critics.

“Arguably, you sold your country out,” Sullivan told Flynn at an initial 2018 sentencing hearing that collapsed when the judge learned that Flynn had not yet completed his required government cooperation. “I’m going to be frank with you. This is a very serious offense. It involves making false statements to the FBI on the premises of the White House – in the West Wing.”

“This judge could be a wild card,” said Weinstein, quickly adding that a scenario for moving forward with a Flynn prosecution was probably unlikely.

“I don’t think there is anything that could be done,” Cotter said. “The Justice Department is the only party that can initiate a prosecution. There is no precedent that I can think of.”

Flynn response to Thursday’s unusual turn of events did not include one of his fiery public addresses that became his signature while campaigning for Trump in 2016.

Instead, Flynn posted a video of a beaming young grandson, waving an American flag and reciting the Pledge of Allegiance.