AUSTIN, Texas — For the first time in two decades, the Texas State Board of Education is slated to make changes to its sex education curriculum, triggering a likely showdown between conservative and liberal state activists.

The last revisions to the health education standards were in 1997, and much of the debate is expected to revolve around issues of contraception, sexual orientation and gender identity.

The state board is holding its first public hearing on the issue Monday with a final vote on the changes in November.

Whatever standards the education board chooses could have implications beyond what Texas students learn. The state’s curriculum standards guide classroom instruction in schools and publishers use those standards to write textbooks for submission to the state board. Because of the size of the textbook market in Texas, the state’s new health standards are expected to influence what publishers include on sexual education topics and could affect what students learn in other states.

Texas law requires schools that offer sex education to promote abstinence as the preferred behavior for unmarried students. Most of those lessons are relegated to middle and high school levels.

The proposed revisions remain focused on abstinence, but some groups are pushing for a more comprehensive sex education curriculum. Changes still could come, and it’s up to the state board to determine whether students should learn more and be introduced to topics earlier.

Curriculum work groups made up of school officials, teachers and health experts began the undertaking of the drafting revisions to the standards last September. 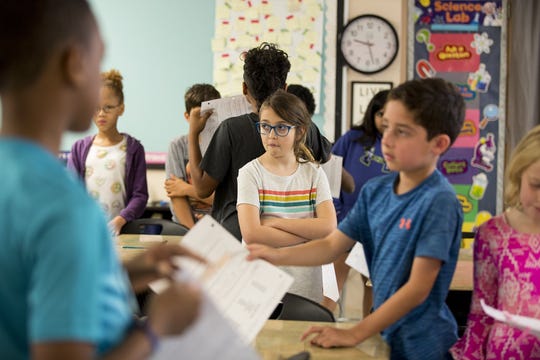 Talia Wilhelm, 10, participates in an activity where fourth graders learned about the functions of the family as part of their human sexuality and responsibility curriculum at Gullett Elementary School on May 16, 2019, in Austin, Texas. AISD is expected to have a new curriculum in June that will teach students more age appropriate lessons. (Photo: Ana Ramirez, Austin American-Statesman)

The recommended revisions that will go before the board Monday include fifth graders learning about fertilization and sixth graders being taught about sexual intercourse. Students could learn about the effectiveness and ineffectiveness of contraception in seventh and eighth grades, which isn’t taught until high school under existing standards.

Currently, the draft revisions do not include any information about sexual orientation or gender identity.

The vast majority of Texas school districts — more than 80% — teach abstinence only material or offer no sex education at all.

Austin is among the 17% of Texas school districts that teach “abstinence-plus,” which includes instruction on methods to prevent pregnancy and sexually transmitted diseases. In October, the school board unanimously approved the expansion of its curriculum, which includes teaching elementary students about sexual orientation and gender identity.

“It would be a tragedy if the new health standards continue to ignore the very existence of LGBTQ students in our classrooms today.”

Kathy Miller, president of the Texas Freedom Network, a liberal watchdog group, said that compared to the current standard, she sees “substantial progress” in the coverage of contraception and sexually transmitted infection prevention. Miller said such changes are critical because about 60% of high school seniors say they already have had sex, many unprotected.

But Miller said she still wants to see sexual orientation and gender identity included in the standards.

“Much has changed in the world and in Texas in the more than two decades since the 1997 standards were adopted,” Miller said. “Same sex marriage is legal across America and as of last week, LGBTQ people are now protected from employment discrimination. It would be a tragedy if the new health standards continue to ignore the very existence of LGBTQ students in our classrooms today.”

Ricardo Martinez, CEO of Equality Texas, an LGBTQ advocacy group, said curriculum can serve as a window when it introduces and provides the opportunity to understand the experiences and perspectives of those who possess different identities.

“What’s at stake is parents losing their rights to know what their kids are being taught.”

Castle said the group opposes any expansion of the curriculum that would include gender identity and sexual orientation.

“Even though we’re close to the end of the process, it is not over, and so we still need to make sure that the board members understand why parents across the state do not want that type of education for their children,” Castle said. “What’s at stake is parents losing their rights to know what their kids are being taught.”