Falwell apologized for a photo he posted on social media that showed him with his pants unzipped and stomach exposed with another woman.

WASHINGTON — Jerry Falwell Jr., the embattled president of Liberty University and an ardent supporter of President Donald Trump, disputed reports on Monday that he had agreed to resign from the evangelical institution.

Multiple media outlets reported  that Falwell had agreed to relinquish his post at the university after allegations emerged of a years-long sexual relationship that he and his wife had with a business partner.

But Falwell told a local Virginia newspaper that he was not stepping down, labeling the reports “completely false.”

Earlier on Monday, Reuters published an interview with a man who said he had a years-long relationship with the evangelical leader’s wife, Becki Falwell,with her husband’s consent and encouragement. 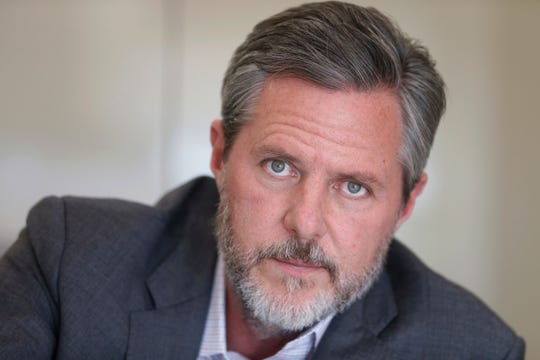 In this Nov. 16, 2016 file photo, Liberty University president Jerry Falwell Jr., poses during an interview in his offices at the school in Lynchburg, Va. Falwell Jr. apologized Monday, June 8, 2020 for a tweet that included a racist photo that appeared on Gov. Ralph Northam’s medical school yearbook page decades ago, saying his effort to make a political point had been offensive. (Photo: Steve Helber, AP)

“Becki and I developed an intimate relationship and Jerry enjoyed watching from the corner of the room,” Granda told Reuters. He said his relationship with the Falwells began when he was 20 and their sexual encounters occurred “multiple times per year” at hotels and at the Falwells’ home in Virginia.

Granda went into business with Jerry Fallwell in 2013, according to Buzzfeed News, when they bought a Miami beach youth hostel together.

A lawyer for Jerry Falwell, Michael Bowe, told Reuters that the evangelical leader “categorically denies” Granda’s account. Bowe told USA TODAY he could not confirm Falwell’s resignation, adding: “I would not report that.”

Liberty University, founded in 1971 in Lynchburg, Virginia, by Falwell’s pastor father, has a student body of more than 15,000 on campus and more than 100,000 when counting its online courses. Known for its conservative politics, Liberty’s honor code states, “Sexual relations outside of a biblically-ordained marriage between a natural-born man and a natural-born woman are not permissible at Liberty University.”

Before Reuters published its story, Falwell released a statement to the Washington Examiner, a conservative newspaper, acknowledging his wife’s extramarital affair.

“During a vacation over eight years ago, Becki and I met an ambitious young man who was working at our hotel and was saving up his money to go to school,” Falwell said in the statement.

Falwell did not name the man in his statement, but his description of their relationship seems to track with Granda’s. Falwell mentioned they had inked a real estate deal with him and “became close with him,” though he denied consenting to or participating in a relationship with him.

“Shortly thereafter, Becki had an inappropriate personal relationship with this person, something in which I was not involved,” Falwell’s statement continues. He said he was extremely distressed by the affair, but he and Becki forgave each other.

“I was and have always remained fully devoted to Becki and we have shared many private conversations to better understand and support each other and to strengthen our marriage,” he wrote.

The Religion News Service and Washington Post, which cited an unnamed school official, first reported Falwell’s departure from Liberty University, which ends a run as president that began in 2007 when his father, The Rev. Jerry Falwell Sr., died.

Falwell Jr., an ardent early support of President Donald Trump, had been on a leave of absence after posting a controversial photo of himself with his arm around a pregnant woman, both of their stomachs exposed, with their pants unzipped.

Falwell was among the earliest Christian conservatives to endorse Trump’s 2016 presidential campaign and has routinely been in the spotlight since then for a series of controversies in both his role at Liberty and his personal life.

Becki Falwell, known as the “first lady of Liberty University,” served as an advisory board member for the Trump campaign’s Women for Trump group. She appeared on an online campaign video last year hosted by the president’s daughter-in-law, Lara Trump, to discuss “teaching traditional American values.”

In his  statement to The Washington Examiner on Sunday,Falwell said the man involved had been threatening to reveal the relationship “to deliberately embarrass my wife, family, and Liberty University unless we agreed to pay him substantial monies.”

“Over the course of the last few months this person’s behavior has reached a level that we have decided the only way to stop this predatory behavior is to go public,” said the statement. 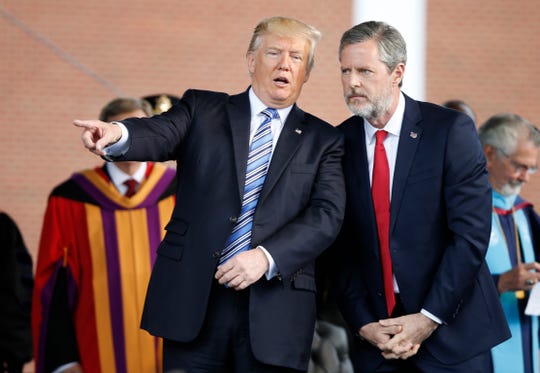