ESPN’s acclaimed documentary series on Michael Jordan and the Chicago Bulls attracted 5.6 million viewers per episode on average over the past five weeks, leaving the sports network with a giant void to fill now that it’s over.

What will it do for an encore?

The answer is a two-part film on Lance Armstrong, which might be even more captivating in at least one respect. While Jordan could be a jerk sometimes for the sake of winning in basketball, Armstrong could be a jerk on steroids, literally and figuratively.

Armstrong also apparently isn’t very fond of the film in which he stars.

“We went to toe to toe on a couple of issues in the film, and I haven’t talked to him” since showing him the film in December, the film’s director, Marina Zenovich, told USA TODAY. “I don’t want to go into details, but I was very clear with him that I was going to make the film that needed to be made. And I did. I think he’s processing that.”

CORONAVIRUS & SPORTS: Get the latest news and information right in your inbox. Sign up here.

WHAT ABOUT US: Yankees, Cowboys among 1990s teams worthy of ‘The Last Dance’ treatment 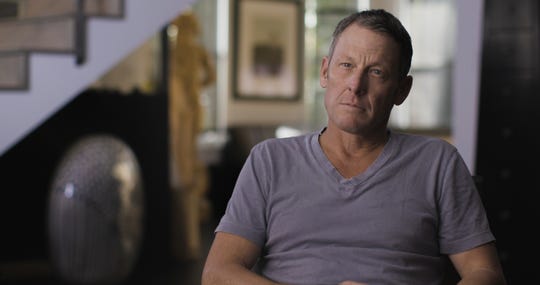 ESPN will air the documentary about former cyclist Lance Armstrong, “LANCE,” over the next two Sundays to conclude May. (Photo: ESPN)

Armstrong, the disgraced former cyclist, didn’t return a message seeking comment. Entitled “LANCE,” the new film about his life will air the next two Sundays in the same prime-time slots vacated by “The Last Dance,” the most-watched documentary content ever on ESPN.

After the COVID-19 pandemic wiped out live sports programming, ESPN moved up both documentary projects to establish what it hopes will become must-see sports TV these days on Sunday nights.

In the case of “The Last Dance,” Jordan’s production company partnered in the film, inviting criticism about how the NBA legend had control of the film and could influence the narrative to his approval.

In the case of “LANCE,” Armstrong participated in the documentary at length as an interview subject but had no editorial control over it, Zenovich said. The director showed it to him before the film premiered at the Sundance Film Festival in January.

“I think he liked parts of it,” Zenovich said. “I think other parts of it were hard for him to see. I think if he was 100%, I wouldn’t have done my job properly.”

Originally scheduled to air in the fall, the film will become the latest in a series of works about the fall of this American icon, including several books and other films. But this one differs in at least two major areas: It arrives on the scene long after the doping dust seemingly has settled from his nuclear implosion of 2012 and 2013, allowing for better historical reflection.

Armstrong, 48, also gave Zenovich unprecedented access to him and his family, allowing viewers to make their own moral determinations about him after all of the years of his lying about illicit doping and his bullying those who tried to tell the truth about it.

“We’ve always been interested in examining Lance Armstrong, not just as an example of a sports doping story, but also within the context of wanting to understand the man and what led to his decisions and actions,” said Libby Geist, vice president and executive producer for ESPN Films and Original Content. “Marina Zenovich has done some of the great character studies in all of documentary film. When she took an interest in uncovering the depths of Armstrong’s story, we were all in.”

After ESPN approached her about doing a film on Armstrong, she conducted eight interviews with him starting in early 2018 and was granted access to him at home and at play. Why would he cooperate to this degree?

Though many initially suspected that Armstrong was granting her such access in an effort to rehabilitate his image, his reaction to it since seeing it indicates it did not turn out the way he wanted.

Another theory behind his cooperation is that Armstrong craves the fame he once had as a regular headline newsmaker. A film like this puts his name and face in the spotlight again. Zenovich even asks him in the opening scene of Part 2 if he feels like he wants to be relevant again.

“Um, this is going to sound terrible,” Armstrong replies. “But I am relevant. I am.”

Zenovich effectively holds up a big mirror to Armstrong that ends up showing who he is in ways that aren’t terribly flattering, even when he is doing most of the talking.

Part 1 largely examines his Texas roots, his battle with cancer and his journey to the first of seven consecutive Tour de France victories in 1999. Part 2 on May 31 studies how his doping, deceit and bullying eventually helped bring him down. Each part spans two hours including commercials and includes interviews with family, former teammates and journalists.

Zenovich confirmed Armstrong was not paid for his time. Why does she think he gave her that much access on camera?

“I don’t know,” Zenovich said. “We got along. I think to be honest, for someone like him, who has gone through a lot of therapy, I think on some level he enjoyed the tough questioning. And it’s kind of like a game, where it’s like an elaborate fencing match. He’s trying to control. I’m trying to go deeper.”