President Trump’s niece, Mary Trump, will release her tell-all-book on July 14. Here are some of the most notable excerpts.

It’s the playbook for the average soap opera episode – and for the latest Trump family memoir.

Few families read as uniquely miserable as the Trump family as it is portrayed by Mary Trump, niece of President Donald Trump, in her new memoir, “Too Much and Never Enough: How My Family Created the World’s Most Dangerous Man” (out Tuesday, July 14).

Mary Trump paints a portrait of a singularly strange and irrevocably damaged family shaped by the Trump patriarch, Fred Trump, a prominent New York city real-estate developer who ruled his household with an iron fist under a dark, oppressive cloud of psychological and emotional abuse. Mary Trump, who holds a Ph.D in clinical psychology, goes so far as to diagnose him as a high-functioning sociopath, to whom love meant nothing.

Mary Trump writes that Fred Trump pitted his children against one another to win his approval, if not his love, creating a “Lord of the Flies”-like atmosphere in which only the toughest and most heartless thrived. It drove eldest son and Mary Trump’s father, Freddy Trump, to alcoholism and an early death, she argues.

Such a dark upbringing makes for a dark memoir. “Too Much and Never Enough” is rife with dysfunction and toe-curling cruelty. These are some of the book’s strangest, most cringeworthy moments.

The family got a tour of the White House and stopped at the Lincoln Bedroom, where Mary Trump observed a half-eaten apple on the bedside table. Donald Trump proclaimed, “This place has never looked better since George Washington lived here.” (Mary Trump notes the White House didn’t open until after Washington’s death.)

Dinner was no less uncomfortable. At one point, Donald Trump gestured to his son Eric Trump’s wife, Lara Trump, and said, “Lara, there, I barely even knew who the (expletive) she was, honestly, but then she gave a great speech during the campaign in Georgia supporting me.” By that point, Eric and Laura had been together for nearly eight years.

The most awkward moment came when Maryanne Trump Barry regaled the table with the story of the time Freddy Trump dumped a bowl of mashed potatoes on his bratty little brother’s head. It’s the sort of harmless, humorous anecdote most families relish retelling over the years, until it becomes lore. But decades later, Donald Trump visibly bristled at the memory, crossing his arms and scowling.

“It upset him, as if he were that seven-year-old boy,” Mary Trump writes. “He clearly still felt the sting of that long-ago humiliation.” 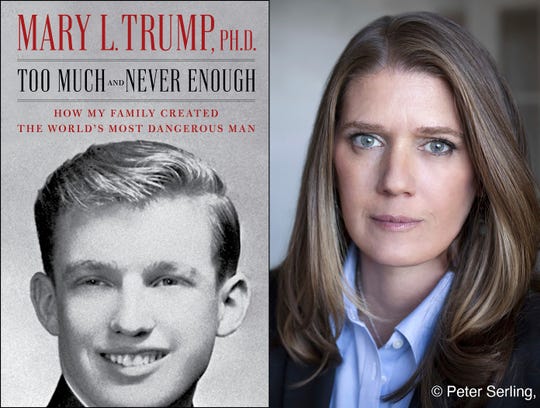 This combination photo shows the cover art for “Too Much and Never Enough: How My Family Created the World’s Most Dangerous Man, and author Mary Trump. (Photo: Peter Serling/Simon & Schuster via AP)

The White House dinner party was far from the worst Mary Trump had ever been too. Growing up, she’d been a frequent guest at the Trump family’s formal holiday dinners, where there was little good cheer on display.

The lack of familial warmth was especially galling one Thanksgiving when, halfway through the meal, Mary Trump’s grandmother, Mary “Gam” Trump, started choking. Freddy Trump noticed, but nobody else seemed to – or else, tried not to. A few glanced up at the ruckus and then back down at their plates.

Finally, Freddy Trump got up, took his mother by the elbow and lead her to the kitchen.

“We heard some shuffling and the distressing sound of my grandmother’s grunts as Dad performed the Heimlich maneuver,” Mary writes. Freddy Trump had been a volunteer ambulance driver in the late 1960s and early ’70s. His training saved his mother’s life that Thanksgiving.

When Freddy and his mother reentered the dining room, there was desultory applause.

“’Good job, Freddy,’ Rob said, as if my father had just killed a mosquito.”

It wouldn’t be the last unpleasant Thanksgiving memory. The first Thanksgiving after her father’s death, Mary Trump was approached by her uncle Robert Trump, who put a hand on his teenaged niece’s shoulder. But not to console her. Instead, he pointed to the crib where her new baby niece, Ivanka Trump, slept.

“See, that’s how it works,” Robert Trump said. Mary Trump got his point: “Out with the old, in with the new.”

That evening, Donald Trump and his father were just the same as ever, discussing “New York politics and deals and ugly women, just as they always had.”

When she was 29, Mary Trump was briefly hired by Donald Trump to write his next book.

They planned a research trip to Mar-a-Lago, so Mary Trump could see the Palm Beach mansion firsthand. “The fifty-eight-bedroom mansion with thirty-three bathrooms outfitted with fixtures plated in gold and an eighteen-hundred-square-foot living room that sported forty-two-foot ceilings was as garish and uncomfortable as I’d expected.”

Still, Mar-a-Lago was more relaxed than the usual Trump gathering places, and she showed up to lunch on the patio wearing her bathing suit and a pair of shorts.

“Donald, who was wearing golf clothes, looked up at me as I approached as if he’d never really seen me before,” Mary Trump writes. “’Holy (expletive), Mary. You’re stacked!”

Mary Trump also recalls the time her grandfather Fred Trump showed her the picture of a half-naked woman he carried around in his billfold.

“’Look at this,’ he had said, sliding the picture out of its slot,” Mary Trump writes. “A heavily made-up woman, who couldn’t have been more than eighteen and might have been younger, smiled innocently up at the camera, her hands holding her naked breasts.”

Mary Trump was 12 at the time.

“’What do you think about that?’ My grandfather had chuckled. I never heard him laugh.”

Why Mary Trump kept her sexual orientation a secret

In June 1999, when Fred Trump was on his deathbed, the family convened around it to pay their respects. Robert Trump’s wife, Blaine Trump, complained about the timing. “We’re supposed to be in London with Prince Charles,” she said. “He invited us to one of his polo matches. I can’t believe we had to cancel.”

Mary Trump didn’t mention her own scheduling conflict: In a week, she was supposed to marry the woman she loved on a beach in Maui. She hadn’t told anybody in the family about her sexual orientation, in part because of a conversation she’d had a few years earlier with her grandmother.

They’d been talking about Princess Diana’s funeral when her grandmother said vehemently, using a homophobic slur, “It’s a disgrace they’re letting that little (expletive) Elton John sing at the service.”