SportsPulse: Former Chicago Bulls teammate B.J. Armstrong breaks down the first two episodes of “The Last Dance” and explains why Michael Jordan’s criticism of his teammates was only the “PG” version.

Usually, winning helps bring teammates together. So does having a fight during a scrimmage, apparently.

Despite hating that Michael Jordan punched him during a scrimmage, Steve Kerr remains grateful that the incident happened.

“Our relationship dramatically improved in our trust in each other,” Kerr said in the eighth episode of “The Last Dance” documentary on Sunday. “It was like, ‘All right; we got that out of the way.’ We’re going to war together.”

At the time, though, Jordan and Kerr were going to war with each other.

Jordan had increased his intensity during the 1995-96 training camp. He remained upset the Orlando Magic beat the Chicago Bulls in the 1995 Eastern Conference finals. He spent the offseason improving his strength, conditioning and game to offset the rustiness he felt during his return late in the season. And he wanted to set the tone with some of his new teammates, including Kerr.

CORONAVIRUS & SPORTS: Get the latest news and information right in your inbox. Sign up here.

“He’s talking all kinds of trash,” Kerr said. “I’m pissed because we’re getting our ass kicked.”

Soon enough, Bulls coach Phil Jackson called what Jordan described as “ticky-tack fouls.” Jordan suspected Jackson applied that tactic to tone down Jordan’s aggression. The approach did not work, though.

So Jordan became even more physical. He committed a hard foul on Kerr before yelling to Jackson, “Now that’s a (expletive) foul.”

“I have a lot of patience as a human being. But I tend to snap at some point because I’m extremely competitive, too,” said Kerr, now the Golden State Warriors’ coach. “I’m just not really good enough to back it up, usually. But I’m going. I’m going to fight.” 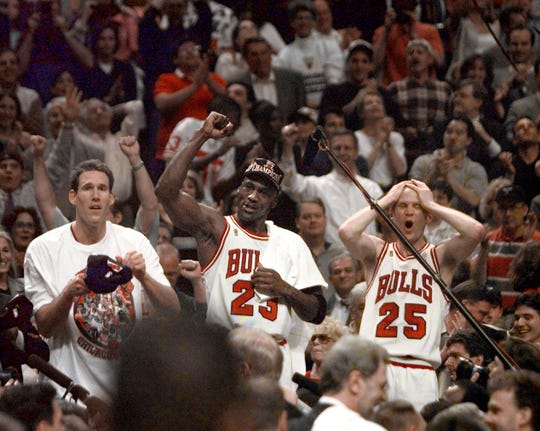 Kerr hit Jordan in the chest, and Jordan then clocked Kerr in the face. Jackson threw Jordan out of practice immediately. Jackson then went to the locker room to confront Jordan, who admitted, “I lost it for a second.”

“I just beat up the littlest guy on the (expletive) court,” Jordan said. “I feel this small.”

Jordan returned to the Bulls’ practice facility. He retrieved Kerr’s phone number. And then he called to apologize.

It did not take long for both parties to feel good.

Said Kerr: “It was the best thing I ever did was stand up for myself with him. He tested everybody he played with. I stood up to him.”

Said Jordan: “He earned my respect. He wasn’t willing to back down to be a pawn in this whole process.”

Here are some other takeaways from Episodes 7 and 8:

How MJ had enough time to train and film ‘Space Jam’

Jordan liked to increase his business portfolio. But he always put basketball first. So when he spent the 1995 offseason filming “Space Jam,” Jordan asked that he had time to train.

“Space Jam” director Jim Pytka had a so-called “Jordan Dome” built near the set that included a full basketball court and a weight room. Though Jordan filmed Monday through Saturday from 7 a.m. to 7 p.m., he said he had a two-hour break to train. He also scrimmaged every day from 7 to 10 p.m.

“I don’t know how he filmed all day and then had the energy to play for three hours,” former Indiana Pacers guard Reggie Miller said. “This dude was like a vampire.”

Jordan was certainly out for blood. He invited the cast’s elite players for scrimmages, including Miller, Patrick Ewing, Shaquille O’Neal and Juwan Howard. Former Bulls teammate B.J. Armstrong observed that Jordan organized these scrimmages because “this was his opportunity for him to see everybody and do scouting reports.”

“Playing against the young talent, they were full of energy,” Jordan said. “I had to excel and get my talent back.”

Late Bulls GM Krause snapped at a reporter about ‘backstabbing’

Jerry Krause announced before the 1997-98 NBA season that Jackson would not return as head coach after that year. He also reiterated that point to Jackson, saying that he would not be retained even if the Bulls went 82-0. Yet, Krause bristled at a reporter’s suggestion that there was “backstabbing between you and coach.”

There was a lot of drama, though. Jordan often demeaned Krause for eagerly claiming credit for how he assembled the roster instead of praising the players. Scottie Pippen took offense to Krause’s refusal to renegotiate his contract after taking a below-the-market deal to ensure job security. Though Bulls owner Jerry Reinsdorf offered Jackson an extension during the 1997 offseason, according to reports, he declined partly because Krause bristled at his hope to become the NBA’s highest-paid coach after winning five NBA championships.

The Bulls managed just fine, leaving Krause to roll his eyes at a reporter’s inquiry about whether he was surprised about the team’s success despite the conflicts between the front office, coaching staff and players.

Yes, we mentioned the Kerr punch. It illustrates how difficult and demanding a teammate Jordan was. “Let’s not get it wrong,” Will Perdue says. “He was an (expletive). He was a jerk. He crossed the line numerous times. But as time goes on and when you think back about what he was actually trying to accomplish, you’re like, ‘Hey, he was a hell of a teammate.’ ” For his part, Jordan is unapologetic. “Winning has a price, and leadership has a price,” he explained. “So I pulled people when they didn’t want to be pulled. I challenged people when they don’t want to be challenged. And I earned that right because my teammates came after me. They didn’t endure all the things I endured. … You ask all my teammates, the one thing about Michael Jordan was he never asked me to do something that he didn’t (expletive) do. … I wanted to win but I wanted them to win as well. … If you don’t want to play that way, don’t play that way.”

The end of Episode 7 … WOW.#TheLastDancepic.twitter.com/N3c5lN0mLI

A reminder of SportsCenter’s glory days: Jordan had a bad game in his return to the NBA following his first retirement, and ESPN anchor Keith Olbermann deadpanned: “This just in, Michael Jordan is human.”

The greatest fax in NBA history: When Jordan decided to come back to the Bulls after his first retirement, David Falk, Jordan’s agent and business manager, and Jordan fussed with the statement. Jordan settled on, “I’m back.” The fax was delivered to newsrooms across the country.