Olivia de Havilland is synonymous with original movie star glamour, but she also paved the way for actors by fighting the Hollywood power structure.

Olivia de Havilland, one of the last pillars of Hollywood royalty and a contemporary of Bette Davis and Errol Flynn, died “peacefully from natural causes” Sunday at the age of 104, talent agent Jim Wilhelm told USA TODAY. Her death marks the passing of one of the last stars of classic films of the 1930s, an actress before her time in the fight for equality and an icon who took on the studio system and won.

Best known for her sweet-natured role as Melanie Hamilton in “Gone With the Wind,” the two-time Oscar winner (for 1946’s “To Each His Own” and 1949’s “The Heiress”) will be remembered most for her beautiful diction, an air of refinement and gumption and grace on and off camera. Outspoken and steely in real life, de Havilland starred in more than 50 films on the big and small screen from 1935 to 1988 and was a staunch advocate for actors’ rights and creative freedom in Hollywood.

Bound by the grip Warner Bros. held on her career, the 27-year-old star sued the studio in 1943, prompting a collapse of oppressive long-term contracts in Hollywood. In the later years of her life, the British American actress was no pushover, filing a lawsuit in Los Angeles over being portrayed as a gossip monger in Ryan Murphy’s FX show “Feud: Bette and Joan,” which chronicled the longtime rivalry between actresses Davis and Joan Crawford. 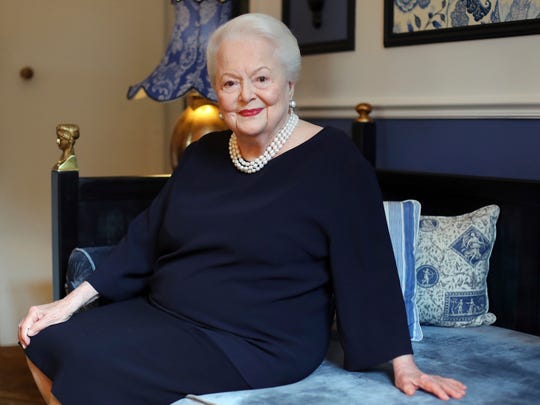 She was born Olivia Mary de Havilland in 1916 in Tokyo, where her father, Walter Augustus de Havilland, taught English at the Imperial University, then became a patent attorney. Her mother, Lilian Augusta Ruse, was a stage actress educated at the Royal Academy of Dramatic Art in London, but she left her career to move to Japan with her husband.

On a family trip to California in 1919, Olivia became ill with a bronchial condition, and her younger sister Joan (later to become the actress Joan Fontaine) developed pneumonia. Lilian decided to remain in California with Joan and Olivia for her daughters’ health. They settled in Saratoga, a suburb of San Francisco, while her father abandoned the family and returned to Japan. De Havilland’s mother divorced in 1925 and married George Fontaine, a strict stepfather the girls resented.

Fontaine died in 2013 at age 96. De Havilland’s death was preceded by son Benjamin Goodrich in 1991. She is survived by her daughter, Gisele Galante Chulack, son-in-law Andrew Chulack and niece Deborah Dozier Potter. Funeral arrangements will be private, Wilhelm said.

After making her Hollywood debut in a version of Shakespeare’s “A Midsummer Night’s Dream,” de Havilland – named for the Bard’s “Twelfth Night” character Olivia – made an early mark opposite Flynn. In 1934, she signed a contract with Warner Bros., which decided to pair her with the then-unknown Australian. They starred a year later in “Captain Blood,” a swashbuckling hit that made the two of them bona fide stars, and they made seven more movies as one of Hollywood’s most memorable on-screen romantic pairings. She played Maid Marian to Flynn’s title rogue in “The Adventures of Robin Hood” in 1938, and they last appeared together in 1941’s “They Died With Their Boots On.”

For David O. Selznick’s 1939 Civil War epic “Gone With the Wind,” de Havilland said that having read the Margaret Mitchell novel, she knew she could bring the character of Melanie to life, and the actress’s soft voice and graceful manner made her the perfect fit for a pivotal role: Melanie’s indelible goodness saved Scarlett O’Hara (Vivien Leigh) from social ruin more than once and even touched Scarlett’s hard heart. Though far less showy than Scarlett, de Havilland’s role is deeply etched in audiences’ hearts.

Olivia de Havilland holds up her two trophies after winning a second best actress Oscar in 1950 for her performance in “The Heiress.” Her first win came in 1947 for “To Each His Own.” (Photo: AP)

The character earned de Havilland her first Oscar nomination, for best supporting actress, but she lost to her “Wind” co-star Hattie McDaniel. De Havilland’s second nod came for 1941’s “Hold Back the Dawn,” where she shared the best actress category with her sister, who won for “Suspicion.” De Havilland took home her own best actress Oscar five years later, for her performance in “To Each His Own,” and they are still the only siblings to have won lead acting Academy Awards.

De Havilland and Fontaine fostered a heated competitiveness that lasted all their lives, from childhood to stardom. That rivalry – rumored to have escalated into a feud in which the two didn’t speak – was the subject of Hollywood gossip for decades.

In 2016, three years after her sister’s death, de Havilland finally broke her silence on their relationship to The Associated Press: “A feud implies continuing hostile conduct between two parties. I cannot think of a single instance wherein I initiated hostile behavior.” However, she said, “I can think of many occasions where my reaction to deliberately inconsiderate behavior was defensive.”

In 1949, Fontaine put it differently, telling columnist Hedda Hopper, “You see, in our family, Olivia was always the breadwinner, and I the no-talent, no-future little sister not good for much more than paying her share of the rent.”

De Havilland referred to her sister as “Dragon Lady.”

“Dragon Lady, as I eventually decided to call her, was a brilliant, multi-talented person, but with an astigmatism in her perception of people and events, which often caused her to react in an unfair and even injurious way,” de Havilland said in 2016.

De Havilland, who won her second best actress Oscar for “The Heiress,” was also nominated for her performance in 1948’s “The Snake Pit,” one of the earliest films to feature a realistic portrayal of mental illness. That role cemented her reputation for embracing flawed and unglamorous characters.

“I believed in following Bette Davis’ example,” she told the Los Angeles Timesin 1988. “She didn’t care whether she looked good or bad. She just wanted to play complex, interesting, fascinating parts, a variety of human experience. I wanted Melanie to be just one of the images. Let’s have a few others.” 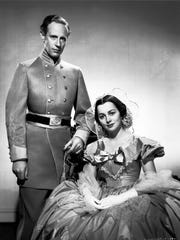 As well-received as she was – both by the public and critically – for her part in “Gone With the Wind,” de Havilland longed for more substantial parts early in her career, particularly more serious ones than as Flynn’s demure leading lady, who was usually a damsel in distress. Warner Bros. did not support her efforts. De Havilland grew increasingly frustrated by the lack of challenging roles and began to reject scripts.

De Havilland wanted to pursue opportunities with other studios, but Warner Bros. told her it added six months to her seven-year contract for times she had been on suspension. (Legally, studios could suspend contract players for rejecting a role, then add that time to the contract period.)

At the urging of her lawyer, she sued Warner Bros., supported by the Screen Actors Guild. The case went to the Supreme Court of California, which ruled in her favor in 1945. Known as the de Havilland Law, the decision proved to be one of the most important and far-reaching legal rulings in Hollywood, reducing the power of the studios and giving greater creative freedom to actors.

Performers of that era and later benefited from her legal case, and the law won de Havilland much respect among her peers and colleagues. Fontaine was even quoted as saying, “Hollywood owes Olivia a great deal.” Warner Bros. circulated a punitive letter that essentially blacklisted de Havilland. She did not work for a film studio for two years until Paramount signed her in 1946.

“As soon as my victory was legally confirmed and I was free to choose the films that I made, Paramount presented me with the script of ‘To Each His Own,’ ” playing an unwed teenage mother. “This was exactly the kind of challenge for which I fought that case,” she told the AP in 2016.

In addition to championing actors’ rights, de Havilland was known for her liberal political stance. She organized a fight for control of the Independent Citizens Committee of the Arts, Sciences and Professions, which she said was being manipulated by a small group of communists. She failed, then resigned, triggering a wave of resignations, including that of an actor she had recruited to the group, Ronald Reagan. Even though she had very publicly worked to organize Hollywood resistance to Soviet influence, she was called to testify before the House Un-American Activities Committee in 1958 because of her liberal activism.

On the personal front, de Havilland was romantically involved with Flynn, Jimmy Stewart, director John Huston and filmmaking mogul Howard Hughes, though Havilland eventually married Navy veteran and novelist Marcus Goodrich in 1946, before divorcing in 1953. They had one son, Benjamin, who died in 1991 after a battle with Hodgkin’s disease.

She wed French journalist Pierre Galante in 1955, moved to Paris and had a daughter, Gisele. De Havilland’s adjustment to Parisian life was recounted in her 1962 memoir, “Every Frenchman Has One.” The couple divorced in 1979.

De Havilland appeared occasionally in films in the 1950s and turned down the role of Blanche Dubois (which won Leigh her second best actress Oscar) in 1951’s “A Streetcar Named Desire.” Though some said her refusal had to do with the suggestive themes of the story, she said in 2006 that she declined the part because she had recently given birth to her son.

De Havilland continued acting in films until the late 1970s and on television through the 1980s. She won a Golden Globe in 1987 and earned an Emmy nomination for “Anastasia: The Mystery of Anna.” In 2009, she lent her distinctive voice to the narration of a documentary on Alzheimer’s disease titled “I Remember Better When I Paint.”

She maintained perspective on her impressive longevity: “All the artists I had known during the Golden Era (live) elsewhere,” she said in 2016, “including the afterworld.”