Law enforcement officers fatally shot a man Thursday suspected of killing a backer of a right-wing group in Portland, Oregon, after a caravan of supporters of President Donald Trump rolled into the city last weekend, authorities say.

Michael Forest Reinoehl, 48, was killed in Oylmpia, Washington, near Lacey as a federal task force tried to arrest him Thursday night, the U.S. Marshals Service said.

“The fugitive task force located Reinoehl in Olympia and attempted to peacefully arrest him,” the Marshals Service said in a statement. “Initial reports indicate the suspect produced a firearm, threatening the lives of law enforcement officers. Task force members responded to the threat and struck the suspect who was pronounced dead at the scene.”

Police in Portland had issued a warrant for Reinoehl’s arrest earlier Thursday on a murder charge. Aaron “Jay” Danielson, 39, was fatally shot in the chest Saturday just after a pro-Trump caravan of vehicles faced off with counterprotesters in Portland.

Reinoehl, a self-professed supporter of antifa, said of the shooting, “I had no choice,” in an interview with Vice News published earlier in the day Thursday.

Lt. Ray Brady of the Thurston County Sheriff’s Office told USA TODAY that the suspect was armed with a handgun.

He said six members of the federal task force were at the scene at the time of the shooting.

Four officers fired shots from Pierce County Sheriff’s Department, Lakewood Police Department, and the Washington Department of Corrections, Brady said, adding that federal marshals did not fire on the suspect. 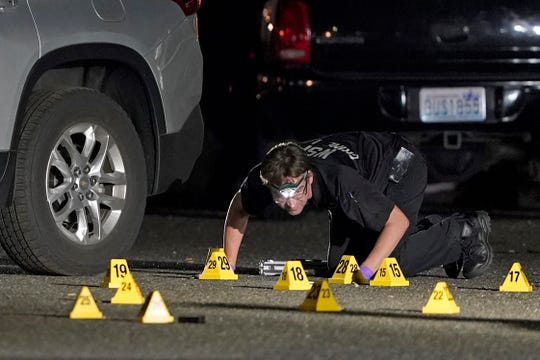 No others were present at the time of the shooting. The U.S. Marshals Service said no law enforcement officers were injured and that the Thurston County Sheriff’s Office will lead an investigations into the shooting.

“The tracking down of Reinoehl — a dangerous fugitive, admitted Antifa member, and suspected murderer — is a significant accomplishment in the ongoing effort to restore law and order to Portland and other cities,” Attorney General William Barr said in a statement Friday afternoon.

Reinoehl routinely attended protests in Portland and on social media suggested that violence may be necessary.

He told Vice News that he acted in self-defense during the shooting Saturday and feared he and a friend were about to be stabbed. “I could have sat there and watched them kill a friend of mine of color. But I wasn’t going to do that,” he told the news outlet.

Reinoehl said he had been shot at in a previous protest and was cited by Portland police for possession of a firearm at another protest. He was also wanted on a warrant in Baker County in Eastern Oregon for skipping a hearing in a case where he was charged with driving under the influence of controlled substances, reckless driving, reckless endangerment and unlawful possession of a firearm.

The shooting Saturday came amid months of unrest in Portland where demonstrators have gathered nightly since the death of George Floyd to call for racial justice and changes to policing.

Cities across the country have seen widespread protests over the summer, some times turning violent and destructive. Portland, however, has faced particular scrutiny from Trump, who says the city’s Democratic mayor has allowed “anarchists and agitators” to overrun the city.

Federal agents were sent to Portland to defend a courthouse, and the action further sparked violent protests in July.

Saturday saw clashes between member of the pro-Trump caravan, who came to Portland after a rally in nearby Clackamas, and counter protesters. Both sides hurled objects and obscenities. Video showed some in the caravan lobbing tear gas and firing paint balls as some counterprotesters lit fires with Trump flags.

About 15 minutes after most of the caravan left town, the shooting occurred.

As video of the shooting spread, Danielson was identified wearing a Patriot Prayer hat. The right-wing group has been active in the Pacific Northwest for several years and has often been linked to violent clashes at protests.

Gov. Kate Brown said after the shooting of Danielson that the group came to Portland, “looking for a fight.”

Trump defended his supporters’ actions during the skirmishes Saturday, saying “Paint is a defensive mechanism. Paint is not bullets.” Trump also tweeted “Rest In Peace Jay!” after Danielson’s death.