President Donald Trump was booed by crowds at the Supreme Court when he and Melania Trump paid their respects to the late Justice Ruth Bader Ginsburg.

WASHINGTON – President Donald Trump faced a chorus of boos and chants as he joined other mourners at the Supreme Court on Thursday to pay respects to Justice Ruth Bader Ginsburg, a liberal icon who died last week.

Members of the public booed the president and first lady Melania Trump as they approached the casket perched atop the marble steps of the Supreme Court building. Some shouted that Trump should honor Ginsburg’s last wish that the winner of the Nov. 3 president election be allowed to nominate her successor.

“Honor her wish,” some chanted at Trump.

The president and first lady stood expressionless at the late justice’s casket for a few seconds before heading back to the presidential motorcade. 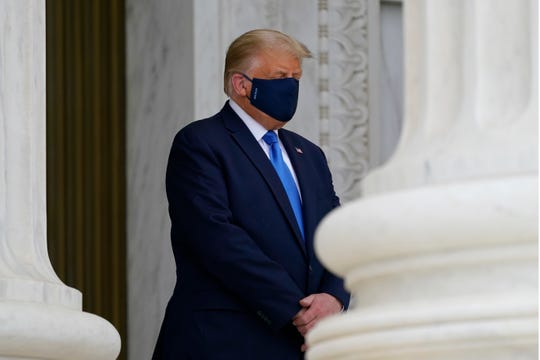 Trump made the trip from the White House to the Supreme Court – where the 87-year-old justice is lying in repose for a second day – even as Trump is preparing for a bruising confirmation fight over her successor. Trump has said he will name a nominee on Saturday, and Senate Republicans have signaled they’re prepared to move quickly.

Someone in the crowd yelled “there he is” and the crowd erupted into boos.

By Thursday morning, the line to see Ginsburg’s flag-draped coffin extended blocks away from the Supreme Court in Washington, D.C. Those in line snapped photos with their phones, many carrying flower bouquets.

Trump’s comments about the court vacancy have invited scorn.

On Wednesday, he said he wanted to fill the slot before the Nov. 3 election so that the entire court could rule on cases that might arise from the election. Trump is already involved in lawsuits against mail-in ballots.

Lawmakers said the president is looking for a Trump-friendly court to hand him the election over Democrat Joe Biden.

“In one day, Trump refused a peaceful transition of power and urged the confirmation of a Supreme Court justice to hand him an election if the results are contested,” tweeted Julian Castro, a former Democratic presidential candidate. “This is fascism, alive and well in the Republican Party.” 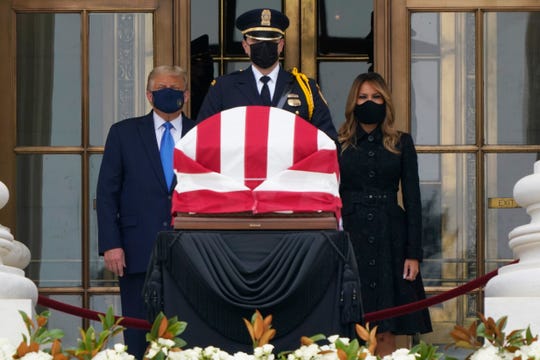