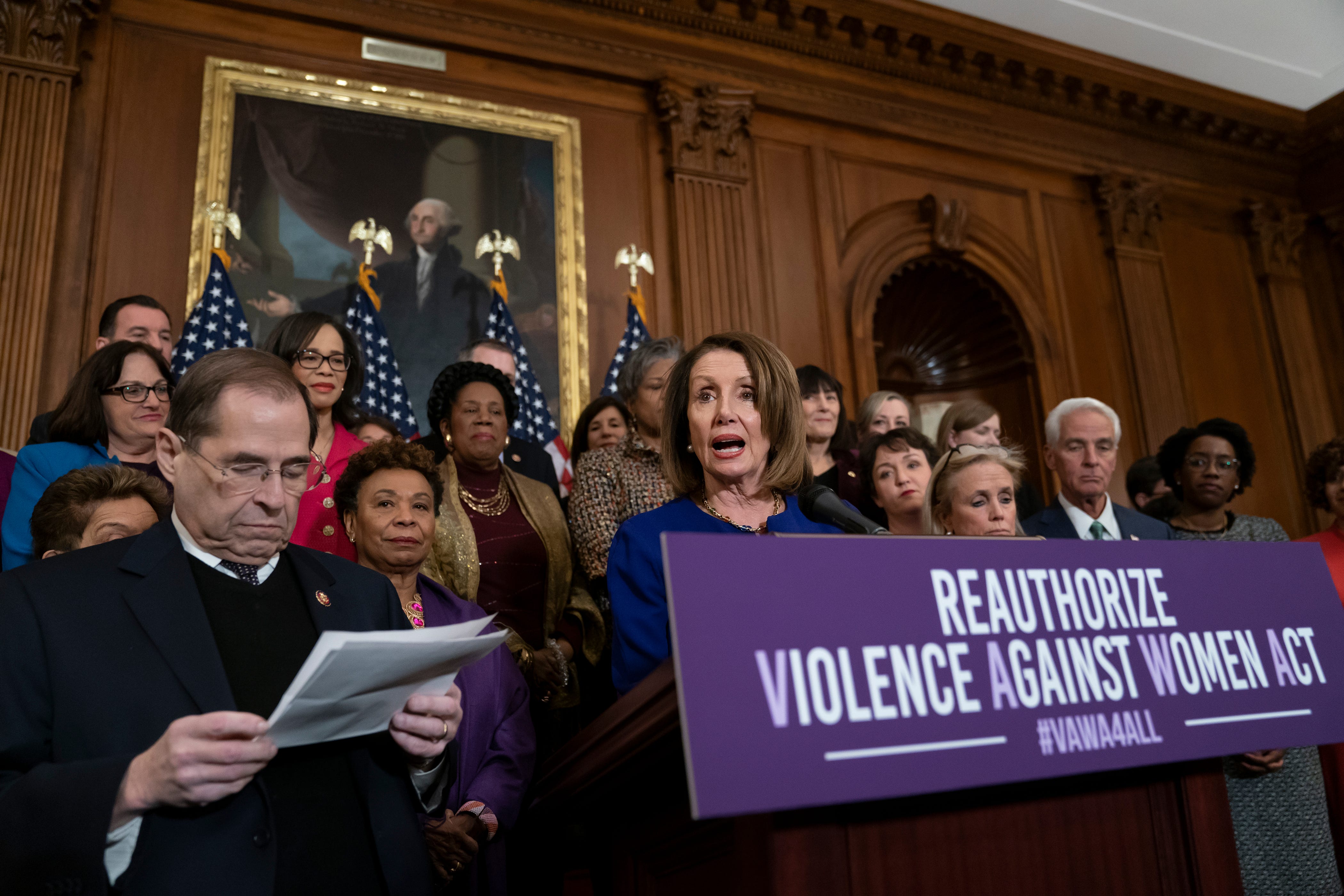 WASHINGTON – The Democratic-led House hopes to revive a Clinton-era law to strengthen domestic and sexual violence protections for women that has gone years without renewal.

The Violence Against Women Act (VAWA) — landmark legislation championed by President Joe Biden that enshrined federal protections and support for survivors — has been in a legislative limbo since it expired two years ago over disputes from some Republican lawmakers.

Reps. Sheila Jackson Lee, D-Texas, Jerry Nadler, D-N.Y., and Brian Fitzpatrick, R-Pa., one of the only Republicans publicly supporting the legislation thus far, introduced the Violence Against Women Reauthorization Act of 2021 at the beginning of March, which is Women’s History Month.

“After its initial enactment a quarter-century ago, VAWA – through policy reforms, interstate cooperation and grant allocation – has been pivotal in providing a national response to protecting half of the population. Equally important, it has ushered in a seismic transformation on how society perceives violence against women,” Jackson Lee said in a statement.

The bill will be considered in the House Rules committee Tuesday.

More:The House is moving on after passing COVID-19 relief. Here’s a look ahead to what’s on the agenda.

Why did the legislation expire? What’s the history behind it? Here’s what you need to know:

What is in the Violence Against Women Act?

The new legislation would extend what previous versions established in terms of support and grants to groups working on issues related to domestic violence, sexual assault and prevention. The proposed bill also enhances and expands victim services and improves housing access for victims and survivors, according to Nadler’s office.

It includes a provision to end immunity for non-Native perpetrators of sexual assault and other abuses of “tribal law enforcement officers on tribal lands.”

For now, despite it expiring more than two years ago, there is still money backing VAWA’s signature grant programs, which has awarded more than $8 billion since 1995.

That includes money for resources like rape crisis centers and survivor advocates, and funds for combatting dating violence on college campuses and facilitating outreach in underserved communities.

The act has been updated and reauthorized three times – in 2000, 2005 and 2013. Updates over the years have had bipartisan backing and included new programs to protect elderly women and women with disabilities; mandatory funding for rape prevention and education; and new protections for victims of trafficking, among others.

Pushback from GOP lawmakers and its chances in the Senate

While the House passed a reauthorization bill in April 2019 with some updated provisions, it died in the GOP-led Senate.

One of the main points of contention from Republicans then was the proposed elimination of the “boyfriend loophole.”

Previous versions of the act barred those convicted of domestic violence or abuse from purchasing and owning a gun if they were married to, lived with or had a child with the victim. But the 2019 amendment, which is in the current legislation too, hoped to extend that provision to include dating partners and stalkers. It’s also included in this year’s bill.

The National Rifle Association objected to the provision, arguing it was too broad and would ensnare people for minor offenses, such as a tweet.

If an abusive partner has access to guns, that drastically heightens the risk of abuse translating into homicide, according to the American Journal of Public Health.

Domestic violence in the age of coronavirus: What happens when you’re stuck at home, but home isn’t safe?

The 2019 House vote on VAWA included 33 Republicans supporting the bill, though the two sides still disagreed on changes aimed at helping gay and lesbian victims, Native Americans and immigrants in the country without legal status. Previous versions of the law also drew wide bipartisan support. When the law was renewed in 2013, 87 House Republicans voted for it.

Fitzpatrick, who has been pushing his Republican colleagues to reauthorize the legislation, said “Congress has historically reauthorized VAWA with broad, bipartisan agreement, and I look forward to working alongside my colleagues to ensure that VAWA continues to protect victims and survivors across the nation.”

More:The filibuster may make it difficult for Joe Biden to pass his agenda, even in a Democratic Congress

The latest version of the legislation must still be approved by the Senate if it passes the House.

It would face a 50-50 divided Senate with the looming prospect of the filibuster. Without at least 10 Senate Republican votes joining all 50 Democrats, the legislation will not make it to Biden’s desk.

In 2013, before closing the “boyfriend loophole” was added to the legislation, several Senate Republicans voted yes on the legislation, including Sens. Susan Collins of Maine, Lisa Murkowski of Alaska, and Richard Burr of North Carolina.

If the legislation does make it to the president for his signature, the bill will have come full circle for Biden.

Biden was the primary author and original sponsor when it was first passed in 1994. He was then a Delaware senator, and the then-chairman of the Senate Judiciary Committee.

He has said it was his “proudest legislative accomplishment” from his lengthy Senate career, and ran on enacting its reauthorization during his first 100 days extensively during his presidential campaign.

Biden applauded the reintroduction of the bill and urged Congress to “come together in a bipartisan manner to ensure swift passage” of the legislation in both chambers.

“Strengthening and renewing VAWA is long past due. Delay is not an option, especially when the pandemic and economic crisis have only further increased the risks of abuse and the barriers to safety for women in the United States,” Biden said. “This should not be a Democratic or Republican issue – it’s a matter of justice and compassion.”

Between 1994 and 2010, intimate partner violence dropped by more than 60 percent, according to the Department of Justice, a precipitous decline experts at least partially attribute to the law’s passage.

In more recent years, there has been a 42 percent increase in such cases from 2016 to 2018, according to the National Coalition Against Domestic Violence.

A report from the University of Kentucky  found there has been a 51 percent increase in reporting of intimate partner violence after mandatory arrest laws from VAWA went into effect, and 85 percent of women in shelters were supportive of mandatory arrest policies implemented by the legislation.

Now, since the coronavirus has kept more victims at home with their abusers, there have been increases in domestic violence calls: The National Domestic Violence Hotline reported a 9 percent increase in calls between March 16 – when many states issued lockdown orders – and May 16 compared with the same period in 2019.

“When you hear about the impacts of COVID, people don’t talk too much about the domestic violence front,” said Fitzpatrick “It’s a huge problem and it’s really increased the urgency that everybody in Congress should have to pass this.”