On June 19, Americans around the country will celebrate Juneteenth, a holiday commemorating the Emancipation Proclamation in the USA.

This year, the annual celebration of freedom comes as the country grapples with its long-standing history of systemic racism, as well as the fate of its Confederate monuments, flags and symbols amid nationwide protests against police brutality and racism after the death of George Floyd.

“Juneteenth is a unifying holiday. It is the completion of the celebration of freedom in America,” said Steve Williams, president of the National Juneteenth Observance Foundation.

Juneteenth is often celebrated with joyful community and family gatherings, but many of these events will probably go virtual this year because of the coronavirus pandemic.

Here is what you should know about Juneteenth:

On June 19, 1865, Maj. Gen. Gordon Granger informed a reluctant community in Galveston, Texas, that President Abraham Lincoln had freed enslaved people in rebel states two and a half years earlier. He pressed locals to comply with the directive.

Although Lincoln proclaimed the emancipation of enslaved people, effective Jan. 1, 1863, enslavers were responsible for telling them that they were free, and some ignored the order until Union troops arrived to enforce it, according to Cliff Robinson, founder of Juneteenth.com. Texas was the last Confederate state to have the proclamation announced.

Though the story of Texas’ emancipation is the most widely known, Williams said, other significant events in the history of emancipation took place on and around that date. He said the first known Juneteenth celebrations began in 1866 and spread across the country as African Americans migrated to new cities. 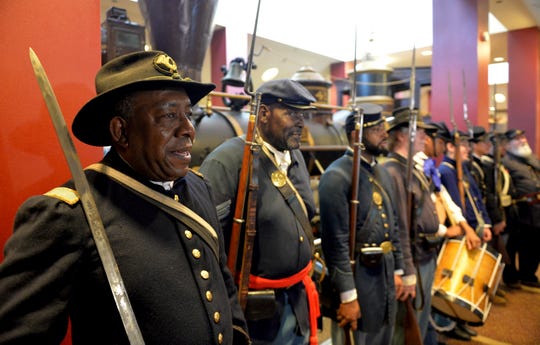 Today, 47 states and Washington, D.C., recognize Juneteenth as either a state holiday or ceremonial holiday. Juneteenth celebrations have been seen in episodes of television shows such as “Black-ish” and “Atlanta”.

Activists push for wider recognition, including a designation as a national holiday and an acknowledgment by Wall Street and the New York Stock Exchange.

“Federal recognition is really what our job is,” Williams said.

Where does the name ‘Juneteenth’ come from?

Juneteenth is a combination of “June” and “nineteenth,” in honor of the day that Granger announced the abolition of slavery in Texas. The holiday is also known as Freedom Day or Emancipation Day.

How do people celebrate Juneteenth?

At cookouts, he said, red food and drink, such as strawberry soda and red velvet cake, are traditional. Red, white and blue are on the Juneteenth flag. The color red symbolizes that “from the middle passage to George Floyd, our blood has been spilled across America,” Williams said. 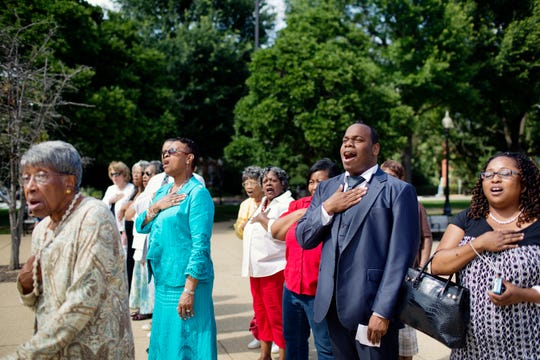 Participants sing the national anthem during a wreath-laying ceremony to commemorate Juneteenth at the Emancipation Memorial in Lincoln Park in the Capitol Hill neighborhood of Washington on June 15, 2012. (Photo: Melissa Golden, for USA TODAY)

How will Juneteenth be different this year?

Williams said many events will be livestreamed online and in lieu of traditional parades, some organizers have planned caravans.

“That certainly will allow and inspire more people to participate in Juneteenth celebrations,” Robinson said. “They just have to be made aware that the celebration exists.”

He noted that more companies have started to recognize Juneteenth amid the protests against racism. Jack Dorsey, CEO of Twitter and digital payment platform Square, said both companies will make Juneteenth a company holiday this year at all of their offices across the world.

Hulu is shifting the premiere dates for two original shows, “Love, Victor” and “Taste the Nation,” so as not to detract from Juneteenth. The company announced it is taking action to “fight against the injustice” and support the Black Lives Matter movement by donating $5 million to nonprofit organizations, including the NAACP.

“The date represents an important turning point for our nation and for human rights, and we believe that now, more than ever, it deserves to have its own day in the spotlight,” the tweet read.

President Donald Trump had planned to hold a campaign rally on Juneteenth in Tulsa, Oklahoma, the site of a massacre in 1921 when white men attacked and killed Black residents in a Black business district. Facing backlash over the date, Trump announced Friday night he would move the Tulsa rally one day later.

“We had previously scheduled our #MAGA Rally in Tulsa, Oklahoma, for June 19th – a big deal,” he wrote on his Twitter account. “Unfortunately, however, this would fall on the Juneteenth Holiday. Many of my African American friends and supporters have reached out to suggest that we consider changing the date out of respect for this Holiday, and in observance of this important occasion and all that it represents. I have therefore decided to move our rally to Saturday, June 20th, in order to honor their requests.”

Virginia Gov. Ralph Northam announced Tuesday that he will work with lawmakers to designate Juneteenth an official holiday in the state that was once held the Confederacy’s capital. Also Tuesday, Philadelphia Mayor Jim Kenney said he would issue an executive order making the day an official city holiday.

Was Juneteenth the end of slavery in the USA?

Though Juneteenth marks the day Texas was informed of the Emancipation Proclamation, freeing enslaved people there as it had in other secessionist states, it did not apply to Union states, such as Maryland, where there were enslavers that had not seceded in the Civil War. The Thirteenth Amendment, which was ratified in 1865, freed enslaved people everywhere in the USA.