Volunteers swam down about 164 feet in Greece’s Ionian Sea to remove the fishing nets from HMS Perseus, which can be deadly for marine life.

A bottle of whiskey salvaged from a 1941 shipwreck off the coast of Scotland was expected to sell for thousands of dollars at auction this week.

The 18 kg bottle of blended whiskey was recovered from the SS Politician cargo ship, which ran aground in shallow water near the island of Eriskay while en route to Kingston, Jamaica, and New Orleans.

The crew were unharmed, and locals, suffering from war-time rationing, waded into the oil-soaked water to loot the cargo, which included cottons, medicines, 28,000 cases of malt whiskey and Jamaican banknotes equivalent to millions of dollars today.

The salvage operation by divers, islanders and customs officials inspired the novel “Whisky Galore,” which tells the story of the thirsty islanders’ attempts to evade confiscation by authorities. The novel was adapted to the screen as a British comedy in 1949 and as a 2016 remake.

Read this: Miner who discovered the largest tanzanite gems ever has now found a third – and it’s worth millions

A bottle of whiskey salvaged from a 1941 shipwreck off the coast of Scotland was expected to sell for thousands of dollars at auction this week. (Photo: Provided by the Grand Whisky Auction)

This particular bottle was recovered by diver George Currie, according to the Grand Whisky Auction. Currie’s team was working on a subsea cable repair when they located the wreck.

These bottles rarely come up in auction, and only a few have been sold over the years, said Jane Manson, director of the Grand Whisky Auction.

“It is rare to recover a bottle from the wreck that has not been destroyed by the tides and the passage of time,” Manson said. “It is a stunning piece of whiskey history.”

The minimum price on the bottle is £9000, which is nearly $12,000, but the bidding could well exceed that by the time the auction closes on Monday, Manson said.

The sale also comes with an original movie poster, diving helmet and bricks from the ship.

The bottle is not suitable for human consumption, according to the auction house. 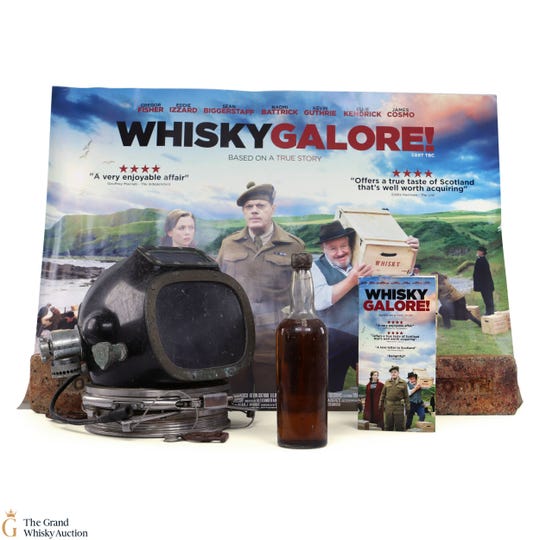 The bottle of whiskey also comes with an original movie poster, diving helmet and bricks from the ship. (Photo: Provided by the Grand Whisky Auction)